Time now to officially, fully, unveil the cover for Behind the Mask, the fourth novel in the Jill Andersen mystery series and the immediate follow-up to Behind the Badge (June 2016)! 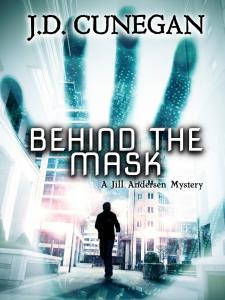 to be a hero when everyone’s out to get you.

Once upon a time, Jill Andersen considered herself a hero. Not just because of the badge handed to her by the city of Baltimore and the pledge she once made to protect and serve. Her secret life, as the vigilante Bounty, had allowed Jill to protect her native Baltimore in ways her day job never allowed.

But all that has gone to hell now. One case pushed Jill past her limits, to the point where she made choices she can’t take back. As a result, the entire city is on the lookout for her. Allies can no longer be counted on. People who were once in her corner might very well be trying to bring her down… to say nothing of those she has crossed along the way.

But that’s the least of Jill’s problems. A shadowy figure emerges among the chaos, and his link to Jill’s past has the potential to be ultimate undoing. Jill thought every link to Project Fusion has been settled once she solved Dr. Trent Roberts’ murder almost one year ago, but if she’s not careful, her past might just kill her.

Behind the Mask, the gripping, hard-hitting fourth novel in the Jill Andersen mystery series (Bounty, Blood Ties, Behind the Badge), gives readers yet another taste of author J.D. Cunegan’s comic book-inspired brand of fast-paced prose, with chapters that fly by and plot twists that will leave readers guessing and waiting for more.

Behind the Mask will release in Kindle and paperback in January 2017. Also, be on the lookout for Behind the Badge, which will be out in June 2016!

The third novel in the Jill Andersen mystery series — Behind the Badge — is currently in the revision stages, and I’ve begun writing the first draft of Behind the Mask, the fourth Jill Andersen book.

BUT THAT’S NOT ALL…

In addition, I’m writing a political thriller titled The Pen is Mighty, which follows political speechwriter Peter Hollingsworth as he stumbles across a scandal involving Senator Roger Pearson — who is running for President. Will Hollingsworth’s knowledge get him killed?

I’m also in the beginning stages of a supernatural/fantasy epic titled Notna — in which Texas A&M archaeology professor Dr. Jack Corbett stumbles upon the Gem of Notna, is deemed the next Chosen One, and thrust in the middle of a holy war that’s been at a stalemate for centuries.

Expect synopses and cover reveals (and maybe even release dates) in the coming days!

And in the meantime, head on over to Amazon and pick up your copies of both Bounty and Blood Ties (that way, you’re all caught up once Behind the Badge hits in June)!