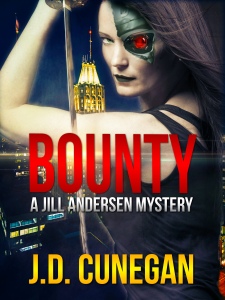 en is one of Baltimore’s best and brightest detectives, but she harbors a dark secret — a secret that threatens to come out when the body of Dr. Trent Roberts is pulled out of the Chesapeake Bay. Dr. Roberts’ connection to Jill reveals a past that involves a tour in Iraq, a secretive cybernetic experiment, and a conspiracy that involves a native son.

Can Jill solve the case while still keeping her secret? Will her partners at the Seventh Precinct find out what she’s so desperate to hide? What was Dr. Roberts looking into that led to his murder? And perhaps the biggest question of all…

Bounty was nominated for a TopShelf magazine Indie Book Award!

g as Jill Andersen could remember, her father was a hero.

But heroes don’t commit murder, do they? The state of Maryland said Paul Andersen did just that, three times over, and was set to execute him for it. But Jill and the rest of her colleagues at the Baltimore Police Department come across the murder of a law student that leaves her hopeful that she can clear her father’s name.

While Jill and her colleagues work against the clock to clear her father’s name, new players emerge, hinting to a deeper, darker conspiracy than what was previously known. An enigmatic faction known as The Order reveals itself, and the mystery surrounding Paul’s alleged duplicity leaves more questions than answers.

Along the way, Jill must not only face the possibility that her father was not who she thought he was, but she must also face the prospect of her secret being revealed. The stakes are higher than ever in Blood Ties, the intense follow-up to J.D. Cunegan’s debut mystery Bounty.

Can Jill save her father before it’s too late? Will she even want to?

Behind the Badge (Jill Andersen #3) 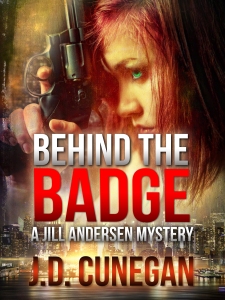 ersen, being part of the Baltimore Police Department has always been both a tremendous honor and a serious responsibility. Her father, before his fall from grace, had instilled in her a great respect for police and the work they do day-to-day. But when a teenage boy winds up dead on the outskirts of downtown Baltimore, Jill finds herself once again faced with those who would abuse their badges to fulfill personal agendas and uphold biases.

Jill still has a job to do, but she soon finds that not everyone is in her corner. For the first time in almost four years working Homicide, Jill finds herself at odds with people who claim to be on her side. From other cops to suits downtown all the way to the Mayor’s office, it becomes increasingly clear that Jill will need to rely on more than just her badge if she’s to solve this case.

But even if she finds justice, what’s the price?

Behind the Badge, the gripping, hard-hitting third novel in the Jill Andersen series (Bounty, Blood Ties), gives readers another taste of author J.D. Cunegan’s comic book-inspired brand of fast-paced prose, with chapters that fly by and plot twists that will leave readers constantly guessing and waiting for more.

Behind the Mask (Jill Andersen #4)

It’s hard to be a hero when everyone’s out to get you.

Once upon a time, Jill Andersen considered herself a hero. Not just because of the badge handed to her by the city of Baltimore and the pledge she once made to protect and serve. Her secret life, as the vigilante Bounty, had allowed Jill to protect her native Baltimore in ways her day job never could.

But all that has gone to hell now. One case pushed Jill past her limits, to the point where she made choices she can’t take back. As a result, the entire city is on the lookout for her. Allies can no longer be counted on. People who were once in her corner might very well be trying to bring her down… to say nothing of those she has crossed along the way.

But that is the least of Jill’s problems. A shadowy figure emerges among the chaos, and his link to Jill’s past has the potential to be her ultimate undoing. Jill thought every link to Project Fusion has been settled once she solved Dr. Trent Roberts’ murder almost one year ago, but if she’s not careful, her past might just kill her.

Behind the Mask, the gripping, hard-hitting fourth novel in the Jill Andersen mystery series (Bounty, Blood Ties, Behind the Badge), gives readers yet another taste of author J.D. Cunegan’s comic book-inspired brand of fast-paced prose, with chapters that fly by and plot twists that will leave readers guessing and waiting for more.

Someone is killing Baltimore’s heroes. 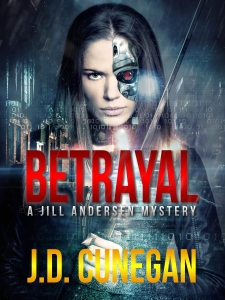 The ones with badges. The ones who put out fires. The ones who debate laws designed to make the citizens’ lives better. None of them are safe, and their deaths amount to little more than public spectacle. A mysterious band of militants called The Collective takes credit for the killings, but the origins and identities of its members are unknown.

Jill Andersen now has an FBI badge on her hip. She is tasked with bringing down the cult, and she must make sure she doesn’t wind up in their crosshairs in the process. All of her theories and leads come up empty – none of the usual suspects are behind these ghastly murders. They might just be in the line of fire themselves.

With those closest to her now targets, Jill must race against the clock to determine who’s killing the best Baltimore has to offer. But along the way, she’ll discover a jarring secret – one that threatens to make her question everything that has happened in her life to this point.

Assuming it doesn’t kill her first.

Betrayal, the gripping, hard-hitting fifth novel in the Jill Andersen mystery series (Bounty, Blood Ties, Behind the Badge, Behind the Mask), gives readers yet another taste of author J.D. Cunegan’s comic book-inspired brand of fast-paced prose, with chapters that fly by and plot twists that will leave readers guessing and waiting for more.

Click here or here to catch a sneak peek.

CLICK HERE for details on how to purchase signed copies.