In which I review a pair of gems each from Rose Montague and Alex P. Berg.

Jade is the first in a trilogy of supernatural thrillers and a lot of fun to read. The titular heroine is called a “magical mutt” in the blurb, and for good reason — she’s part witch, part vampire, part faerie, and part shifter… and that just scratches the surface. There is even more to Jade than that, and I really hope future stories dive further into her backstory, which is only hinted at in the second half of this book.

But as much of a badass as Jade is — and you all know my love for badass heroines — she has a softness and a vulnerability to her that keeps her from feeling like she’s too strong or too powerful. Her chemistry with Jane is clear from the instant they meet, and that chemistry is one of the reasons I’ll be diving into the second book, Jane, very soon.

There are a few slight quibbles that kept me from giving Jade five stars; this book couldn’t used one more pass-through in editing, and the pacing does dip on a few occasions. But what starts as a supernatural murder mystery quickly devolves into something deeper and darker, something that promises to show us much more of this vibrant, dark world Jade inhabits.

But more than anything, Jade is a fun read and a strong introduction to the trilogy. 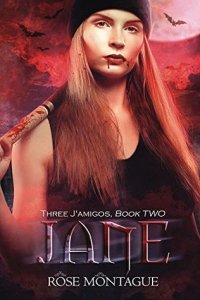 Jane is the sequel to Jade, but this time we see the continuing tale through the eyes of London Jane, a vampire to whom Jade struck a relationship with in the first book. This second novel sees Jane and Jade jetting across the world trying to kill the Devil, and in a lot of ways, this is a cleaner, more adrenaline-packed outing than the first book.

The two vampires’ bond is more than emotion or physical attraction; they are linked to each other in ways that help them in their quest and serve the plot. This story is simultaneously self-contained and has an effect on the world at large, and while I found myself occasionally wondering about characters I met in Jade, Jane is such a fun ride that those quibbles are minor.

The editing issues that plagued Jade are largely absent from Jane, though there is the occasional plot point that seems to come out of nowhere (one major one in particular is the only thing that keeps me from giving this book five stars).

Still, this is another fun read from Rose Mantague, one that has me eager for the third installment, Jill (and you all know how I feel about badasses named Jill).

In a lot of ways, Red Hot Steele is your typical murder mystery, down to the at-times stereotypical hard-nosed Detective Daggers — who is equal parts cynical, not as funny as he thinks he is, and sexist. But it’s the little tweaks to the formula along the way that ultimately turn this book, my first read from Alex P. Berg, into an engrossing, fun read.

We open with Daggers losing his old partner and having to deal with a new partner — a female with seemingly unique psychic abilities named Shay Steele. Their interactions are typical and predictable at first, but as the book progresses and they learn each other as detectives and as people, they develop a chemistry that I look forward to exploring further as I dive deeper into the series.

Oh, and there’s a nice twist on Steele’s character at the end that I particularly enjoyed. For me, it was a far better payoff than actually solving the murder.

I’m a fan of murder mysteries that don’t take themselves too seriously — it’s one of the reasons I was such a fan of the TV series Castle. Red Hot Steele unfolds in the same manner; sure, there’s dark material here, but this book never forgets to have fun. The laugh-out-loud moments can be counted on one hand, but there’s plenty of whimsy and chuckle-worthy moments to keep the macabre from getting lost in itself.

Berg has a way with words, and his sentence flow is some of the best I’ve read — particularly among indie authors — this side of R.R. Virdi. He’s also done a fine job of slowly introducing us to a world that resembles ours, but is just different enough. The supernatural and the occult aren’t huge factors in Red Hot Steele, but something tells me that will change as we dive deeper into the series.

There’s nothing particularly revolutionary here, but Red Hot Steele is still a fun, entertaining read that introduces us to a world full of promises and co-protagonists who have the potential to grow as individuals and as a pair. If you get me to care about your characters, I’ll go along for just about anything, and Berg has done a good job of getting me invested in what happens to Daggers and Steele going forward. 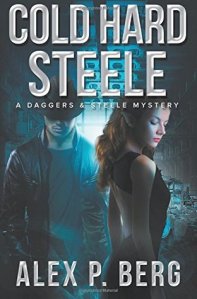 In a lot of ways, Cold Hard Steele is a worthy follow-up to Red Hot Steele, taking what worked so well in the first installment of Alex P. Berg’s supernatural mystery series and building upon it.

For one thing, Cold Hard Steele places a brighter spotlight on the supernatural aspect of the world Daggers and Steele inhabit. What was background dressing in the first novel takes the spotlight with aplomb in this edition, and though it featured possibly my least favorite supernatural creature in werewolves, the mystery is crafted well enough that it hardly mattered.

I enjoyed watching the further development of the partnership between Daggers and Steele — though I can certainly tell where it’s going. But it almost has a Castle season 2/3 feel to it, and the lighthearted nature of so much of this book is a strong counterbalance against the mayhem and the murder surrounding everyone.

There’s even a fictitious novel that features prominently in the book.

The only thing that keeps this book from receiving five stars is the ending. Not the solving of the mystery itself, but the fact that it’s revealed in a big info-dump conversation between Daggers, Steele, and the other detectives (Rodgers and Quinto) — instead of unfolding through the interrogation of the character who ultimately wound up being the murderer. I would’ve loved to have read that scene, rather than have everything recited to me after the fact.

Still, Cold Hard Steele is a fun read, a fantastic supernatural mystery, and a worthy follow-up to Red Hot Steele. As of now, there are four other novels available in this series, and I can’t wait to devour them as well.