The 5th Wave by Rick Yancey

The 5th Wave is by far the most intense book I’ve read so far this year.

And “intense” is really the best way to describe it. I’ve not read many “alien invasion” sci-fi books, but I’m guessing most of them don’t start mid-invasion. But by the time we meet Cassie to open this book, we’re already three waves into this. Hearing the waves described after the fact doesn’t sound great, but… wave #3 alone is gruesome in hindsight (so much so that I’m glad we don’t really get it in real time).

The intensity is so thick that it keeps you turning the pages — and when you finally come up for air, you feel it in your gut. Even midway through the book, as we’re introduced to different characters and things are truly unraveling, the intensity never wavers. This book does not give you a breather — which makes sense, because that’s how it is for the characters.

Some of the exposition is mind-twisting. It’s hard to know what’s the truth and what’s not. That can be frustrating, but I think Rick Yancey did that on purpose. The characters, after all, no longer know who or what to trust — so what better way to engage the readers by ensuring they’re not sure what to trust, either?

This is not a book for the squeamish, because of the intensity and the fact that we’re exposed on more than one occasion to child warfare. That can be a difficult subject to stomach, and there were times when even I had to pause and walk away.

But The 5th Wave is incredibly engrossing, written in such a way that you cannot stop reading. The size of the hardback edition can be daunting, but the story is so intense, so all-encompassing, that hundreds of pages fly by in the blink of an eye. Not every character worked for me — Evan, in particular — but I say that understanding there are still two books in this trilogy I’ve yet to read.

But Cassie and Sammy alone are worth the price of admission.

I’ve read a lot of really, really good books in 2016, and The 5th Wave is definitely near the top of the list. The Infinite Sea and The Last Star have a high bar to climb.

Buy The 5th Wave on Amazon

I’ll be honest: I only picked this book up because it shared a title with my debut novel.

And while both my Bounty and Michael Byrnes’ Bounty share a title and open with a grisly murder, that’s where the similarities end. At its heart, Byrnes’ novel asks the fundamental question: when traditional justice fails, is it right for people to take matters into their own hands? This is hardly the first work of fiction to ask that question — I’m reminded of the League of Shadows from Batman lore, and even Batman himself — but Byrnes explores that question amid the backdrop of the Internet and our digital-dependent culture.

Along the way, the bodies pile up worldwide as numerous law enforcement agencies are chasing their proverbial tails. Murder victims aside, there’s little violence in this Bounty — this is more of a psychological thriller than anything — and yet this is a page-turner as fast-paced as anything else I’ve read in the genre.

The technical jargon is overwhelming at times — far more so than the scientific jargon peppered throughout The Martian — but I don’t think my level of knowledge had any bearing on how much I enjoyed the book. But there are a few occasions where a reader might come across a passage that leaves them a little confused, so it bears mentioning.

Readers might also find themselves occasionally backtracking in order to remind themselves of a certain character, and this book seems to end on a little bit of a cliffhanger; there is not 100 percent resolution, and it feels like there’s a potential sequel in the offing.

I hope there is.

The biggest gripe, to me, is the sheer number of characters. Byrnes does his best to give them all their unique quirks and personalities and what not, but there are so many of them that more than a few don’t come across as well as they probably should. The scope of the plot likely necessitated the sheer number of players, but if there is a sequel, I hope Byrnes trims the roster a bit.

All in all, Bounty is a fantastic mystery/thriller that features a disturbingly plausible storyline. To me, the best novels often posit the question “What if…?” and this novel certainly delivers. 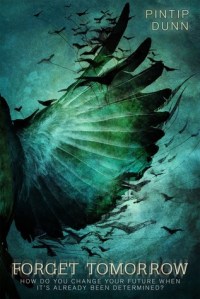 If you could see into your own future, what would you do? Especially if you didn’t like what you saw.

Callie Jones saw the worst possible future for herself, sending Forget Tomorrow into an intense, frantic, and emotional journey that often wadded waist-deep into the philosophical divide between fate and free will. An unexpected ally joins Callie on her journey, and despite some missteps midway through, Pintip Dunn offers up one of the more emotional books I’ve read in 2016.

The immediate aftermath of Callie discovering her future is fraught with tension, fear, and the unknown. Though she spends many of the early chapters by herself, or surrounded by those she isn’t sure she can trust, those chapters fly by… and then she finds herself on the run, confronted with possibly the last person she wanted to see, and then… Harmony.

I’ll be blunt. Most of the love story between Callie and Logan did nothing for me — but that’s because of my own bias against romantic subplots as a whole. They often feel out of place, though I will give Forget Tomorrow credit for not shoehorning in a love triangle like so many other YA novels.

And I did enjoy the fact that of the three potential romantic entanglements among those in Harmony, the spectre of their respective futures stood in the way. Aside from that, though, Logan and Callie as a romantic item did nothing for me.

However, Logan’s overall importance to the plot still worked for me. I have this odd ability to separate the romantic from everything else, so a book still works for me even if the romantic subplot doesn’t.

(And if my distaste for romantic subplots makes me a coldhearted curmudgeon, then… guilty.)

The end of the book seems to build to an inevitable conclusion, but there is a twist in the final moments that even had my mouth agape. I flipped through the final chapter thinking there had to be a way out of it, and I even had my theories on that, but I did not see the move that was made. Perhaps, in hindsight, it should be obvious, but still.

My issues with some of the middle notwithstanding, Forget Tomorrow is a fantastic read, almost impossible to put down. The beginning and end are that strong, and I am eager to pick up the next installment.