Chances are, you’ve read plenty about what Stan Lee meant to people over the last 24 hours. 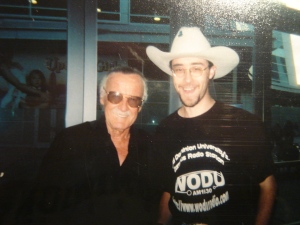 At the risk of sounding redundant, he meant a lot to me, too.

See, Stan Lee — having been credited with mentally birthing such superhero stalwarts as Spider-Man, Black Panther, the X-Men, the Avengers, the Fantastic Four, Daredevil, etc. etc. etc. (in the interest of accuracy, let’s call him the co-creator — because without the work of such men as Jack Kirby and Steve Ditko, these characters would likely not be what they’ve become). — is who he is because those creations are what they are.

Superhero comic books are as popular and ubiquitous as they are today thanks in large part to Lee. His public persona, his cameos across several different adaptations… it’s probably safe to say that without Lee, the superhero genre and comic books as a whole would not be what they are today.

Lee was not the pioneer. But for a lot of people, he is synonymous not only with Marvel, but with comic books as a whole.

Lee didn’t write that issue — or pretty much any issue during my lifetime. But he laid that foundation.

I met Lee in 2002, when I was in Los Angeles visiting a friend over summer vacation. He was doing a Q-&-A after a screening of Spider-Man (the first Sam Raimi film), and he just happened to walk into the ArcLight while my friend and I were getting tickets. I’m forever grateful that he took a few moments to speak with me and pose for a picture.

But Lee, as larger than life as he often seemed, was no different than the rest of us. He loved telling stories. He loved introducing us to characters who were simultaneously out of this world and just like us. It’s often said that DC’s superheroes are gods who become men, while Marvel’s heroes are men who become gods. If that’s true, then Lee is the architect behind that.

I’ve spoken at length about many of my influences. Chris Claremont. Jim Lee (no relation). Michael Turner (RIP). Joss Whedon. Kevin Smith. But I guarantee you every single one of them would (and many have) pointed to Stan Lee as their influence. Lee was almost like the entire comic book community’s grandfather — and this really does feel like we’ve all lost a member of the family.

Lee made quite the impact in his 95 years on this planet, an impact that continues to be felt on the spinner racks and in the movie theaters and on our TV screens and with probably every piece of genre fiction that’s published. I know he’s impacted my work over the years, and I think it would only be fitting if a future book included a Stan Lee cameo of sorts.

It’s the least I can do for a man who played such a huge role in the genre I love.

I’m heartbroken over Lee’s death, but I am buoyed by the outpouring of love that has come his way in the day since — as well as the knowledge that everything he helped create, everything he put in place, will always be there for the rest of us. There will never be another Stan Lee, but there’ll always be a little Stan Lee in all of us.