That includes my reading. I went into 2018 hoping to read 40 books. I’ve managed 28 — and frankly, I’m lucky to have even gotten that far. But I did come across some gems this year, and in this, the third year of me compiling this list, we have a first: a non-fiction entry.

NOTE: These are not the best books that came out in 2018, just the best ones I read this year.

5. Reaper at the Gates by Sabaa Tahir

I can’t compare Sabaa Tahir’s An Ember in the Ashes series to the rest of the YA dystopia set of genres, but I know her novels are intense, emotional, and a blast to read. Reaper at the Gates, the third entry in the series, is no different, and I daresay it’s the best of the series to this point.

This book juggles three points of view — Elias and Laia and Helena — and what could become a jumbled mess instead takes readers on a journey between three disparate and occasionally overlapping perspectives, which only adds to the readability. A great book leaves you wanting more once the last page is turned, and Reaper at the Gates delivers in that regard.

Reaper at the Gates is available in hardcover, paperback, ebook, and audiobook.

What do you get when you take Harry Dresden and drop him in a mythology-rich city like New Orleans? Something a lot like Death Rites, the first book in E.A. Copen’s Lazarus Codex series. While I will go to my grave defending Judah Black (Copen’s other mystical whodunnit series), she’s found a winner in Laz.

Copen shows a deft touch not only when it comes to worldbuilding and creating memorable side characters, she’s a master at making Laz a sarcastic little son of a bitch who’s also the sort of lovable loser you can’t help but root for. In a genre that’s almost overflowing, Copen has found a way to stand out, and I put the Lazarus Codex on the same level as R.R. Virdi’s Grave Report books.

Death Rites is available in paperback, ebook, and audiobook. 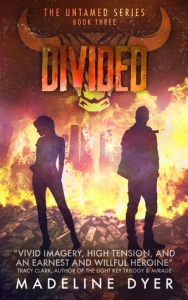 While I enjoyed Fragmented, the second book in Madeline Dyer’s dystopia Untamed series, it lacked something that made me fall in love with the first book. But with book three, Divided, Dyer has fully returned to form, and what unfolds is a gripping, intense, at-times uncomfortable read.

Yet you’ll keep turning the pages. You’ll have to know what happens next. Even knowing there’s another book to go before everything wraps up, the journey is such a thrilling ride that you can’t help but want more. The first book, Untamed, laid out the stakes for Seven, but Divided is the first time I could actually feel them. Divided was so good that I want to read Destroyed *now.*

Divided is available in paperback and ebook.

2. Racing to the Finish by Dale Earnhardt Jr. and Ryan McGee

For the first time, a non-fiction book makes this list, and for good reason. Retired NASCAR star Dale Earnhardt Jr. paired with ESPN’s Ryan McGee to offer a first-hand account of Earnhardt’s final few years behind the wheel, his battle with concussions, and why that battle ultimately led to his decision to step out of the car.

The intimate first-hand account is hard to read at times, and the revelations contained should put any racing fan’s mind at ease as to why Earnhardt retired. Also, this book was written to help others dealing with head injuries and their aftereffects — and if just one person reads this book and seeks the help they need, then this book is an unmitigated success.

Racing to the Finish is available in hardcover, ebook, and audiobook.

Just when I think I can’t love S.E. Anderson’s Starstruck series any more, she puts out a new release. Celestial, book four in the series, is every bit as lighthearted and funny as its predecessors — but for the first time, the stakes feel as heavy as they should. The stark reality of just how out of her element Sally really is slaps you in the face, and you can’t help but keep going.

Anderson strikes a delicate balance in this book, showing how dire everything is without Celestial falling into the same taking-itself-too-seriously trap that so many others in the sci-fi genre do. There are still laughs, but there are also thrills, chills, and a few tears. And with how Celestial ends, the next installment can’t come soon enough.

Celestial is available in paperback and ebook.