The month of August is an exciting one, as I’ve booked a book tour through Silver Dagger Book Tours! For the next 30 days (give or take — math’s not exactly my strength), blogs throughout this (sometimes) wonderful thing we call the Internet will extol the virtues of the Jill Andersen series. Along the way, you’ll also see guest posts from yours truly, and there will even be a giveaway! 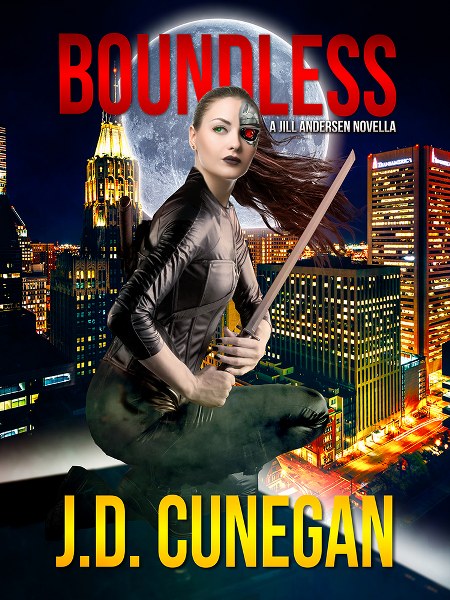 A little more than two years before the events of Bounty, Jill Andersen
makes a life-altering decision. But this decision comes with
consequences she didn’t foresee, and her first night as the
vigilante Bounty winds up being something for which she was wholly
unprepared.
A crisis of faith eventually gives way to certainty: both in terms of
discovering who killed a young man named Johnny Ruiz and in terms of
coping with the latest change in her own life.
Along the way, Jill defies death and discovers just how deep the city’s
corruption runs. But will she survive the experience long enough to
decide if a life of vigilantism is for her?
**only 99 cents!!**
Add to Goodreads
Amazon * Apple * B&N * Kobo 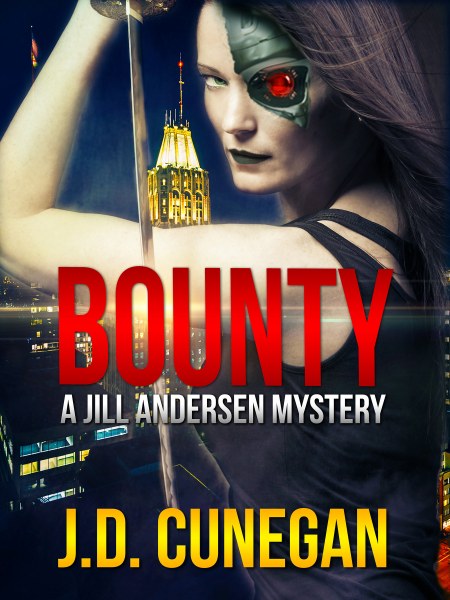 Jill Andersen is one of Baltimore’s best and brightest detectives, but she
harbors a dark secret — a secret that threatens to come out when the
body of Dr. Trent Roberts is pulled out of the Chesapeake Bay. Dr.
Roberts’ connection to Jill reveals a past that involves a tour in
Iraq, a secretive cybernetic experiment, and a conspiracy that
involves a native son.
Can Jill solve the case while still keeping her secret? Will her partners
at the Seventh Precinct find out what she’s so desperate to hide?
What was Dr. Roberts looking into that led to his murder? And perhaps
the biggest question of all…
Who is Bounty?
Add to Goodreads
Amazon * Apple * B&N * Kobo 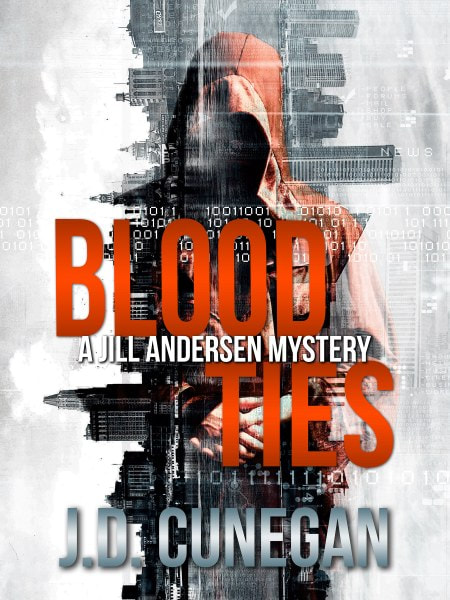 For as long as Jill Andersen could remember, her father was a hero.
But heroes don’t commit murder, do they? The state of Maryland said
Paul Andersen did just that, three times over, and was set to execute
him for it. But Jill and the rest of her colleagues at the Baltimore
Police Department come across the murder of a law student that leaves
her hopeful that she can clear her father’s name.
While Jill and her colleagues work against the clock to clear her father’s
name, new players emerge, hinting to a deeper, darker conspiracy than
what was previously known. An enigmatic faction known as The Order
reveals itself, and the mystery surrounding Paul’s alleged
duplicity leaves more questions than answers.
Along the way, Jill must not only face the possibility that her father was
not who she thought he was, but she must also face the prospect of
her secret being revealed. The stakes are higher than ever in Blood
Ties, the intense follow-up to J.D. Cunegan’s debut mystery Bounty.
Can Jill save her father before it’s too late? Will she even want to?
Add to Goodreads
Amazon * Apple * B&N * Kobo 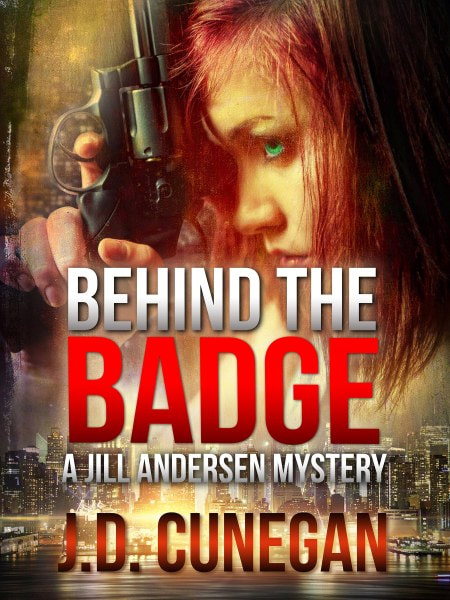 For Jill Andersen, being part of the Baltimore Police Department has
always been both a tremendous honor and a serious responsibility. Her
father, before his fall from grace, had instilled in her a great
respect for police and the work they do day-to-day. But when a
teenage boy winds up dead on the outskirts of downtown Baltimore,
Jill finds herself once again faced with those who would abuse their
badges to fulfill personal agendas and uphold biases.
Jill still has a job to do, but she soon finds that not everyone is in her
corner. For the first time in almost four years working Homicide,
Jill finds herself at odds with people who claim to be on her side.
From other cops to suits downtown all the way to the Mayor’s
office, it becomes increasingly clear that Jill will need to rely on
more than just her badge if she’s to solve this case.
But even if she finds justice, what’s the price?
Behind the Badge, the gripping, hard-hitting third novel in the Jill
Andersen series (Bounty, Blood Ties), gives readers another taste of
author J.D. Cunegan’s comic book-inspired brand of fast-paced
prose, with chapters that fly by and plot twists that will leave
readers constantly guessing and waiting for more.
Add to Goodreads
Amazon * Apple * B&N * Kobo 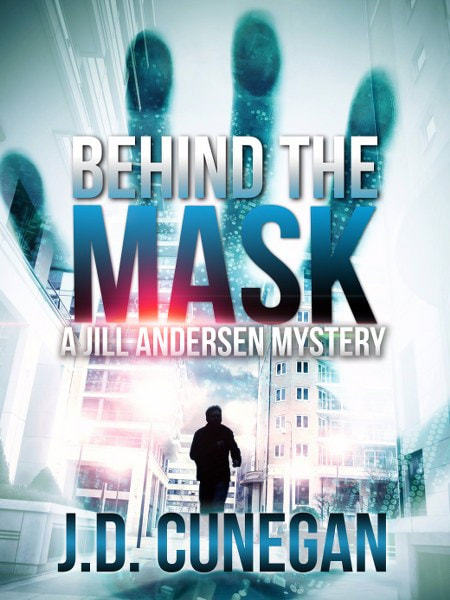 It’s hard to be a hero when everyone’s out to get you.
Once upon a time, Jill Andersen considered herself a hero. Not just
because of the badge handed to her by the city of Baltimore and the
pledge she once made to protect and serve. Her secret life, as the
vigilante Bounty, had allowed Jill to protect her native Baltimore in
ways her day job never could.
But all that has gone to hell now. One case pushed Jill past her limits,
to the point where she made choices she can’t take back. As a
result, the entire city is on the lookout for her. Allies can no
longer be counted on. People who were once in her corner might very
well be trying to bring her down… to say nothing of those she has
crossed along the way.
But that is the least of Jill’s problems. A shadowy figure emerges
among the chaos, and his link to Jill’s past has the potential to
be her ultimate undoing. Jill thought every link to Project Fusion
has been settled once she solved Dr. Trent Roberts’ murder almost
one year ago, but if she’s not careful, her past might just kill her.
Behind the Mask, the gripping, hard-hitting fourth novel in the Jill
Andersen mystery series (Bounty, Blood Ties, Behind the Badge), gives
readers yet another taste of author J.D. Cunegan’s comic
book-inspired brand of fast-paced prose, with chapters that fly by
and plot twists that will leave readers guessing and waiting for more.
Add to Goodreads
Amazon * Apple * B&N * Kobo 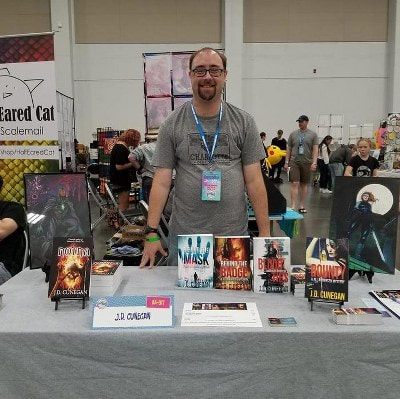 J.D. Cunegan is known for his unique writing style, a mixture of murder
mystery and superhero epic that introduces the reader to his comic
book-inspired storytelling and fast-paced prose. A 2006 graduate of
Old Dominion University, Cunegan has an extensive background in
journalism, a lengthy career in media relations, and a lifelong love
for writing. Cunegan lives in Hampton, Virginia, and next to books,
his big passion in life in auto racing. When not hunched in front of
a keyboard or with his nose stuck in a book, Cunegan can probably be
found at a race track or watching a race on TV.
Website * Facebook * Twitter * Instagram * Bookbub * Amazon * Goodreads